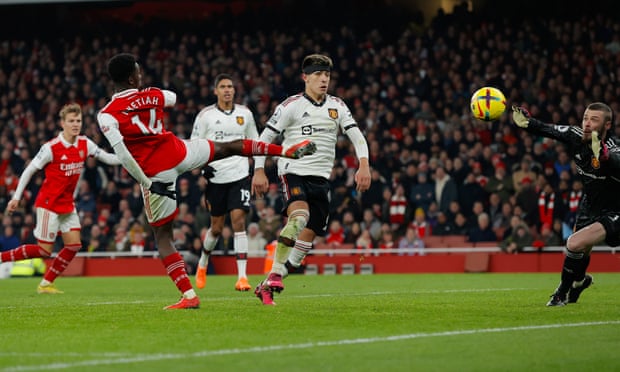 Managers can map out the league in immense detail. They can work out when they might rest players, when training might be stepped up or relaxed. They can plot when they might use a back three or a back four. They can draw up contingencies: if he is out then he can play here or we can switch him over there. And then sometimes, even in the days of multi-layered squads, of two or more players for every position, things just happen.

Maybe that is unfair on Eddie Nketiah. Maybe Mikel Arteta always had faith he could deputise for Gabriel Jesus. Maybe it’s unfair to think of him as an unlikely matchwinner. But Sunday against Manchester United was his fifth start of the season. And it was the first day of his life when his number of Premier League starts for Arsenal (24) exceeded his age (23)

It may be Nketiah goes on to score goals by the barrel-load and wins another half-dozen titles, that in a decade it seems bizarre he was ever doubted, but there has been no sense of inevitability about his emergence. Rather, for now, the temptation is to add him to the list of improbable goalscorers who have added momentum at a key stage of a title-winning season: a Federico Macheda or a David Needham; or, from an Arsenal perspective, a Christopher Wreh or a Martin Hayes.

Perhaps that is unfair, but there are two possible scenarios that demonstrate just how contingent success can be. Imagine Nketiah had not guided home that mis-hit Martin Ødegaard shot in the 90th minute. Then the outstanding memory of him from the game would not have been his close-range header to equalise after 24 minutes, but the chance that fell to him with six minutes remaining. In a crowded box, space suddenly opened up, a corner dropped kindly and … David de Gea made a very good save.

Suddenly, that snapshot would have been filed alongside the excellent save Nick Pope made from Nketiah late on against Newcastle. Could he have done better? Would a more clinical finisher have guided his shot slightly nearer the corner, have given the goalkeeper no chance? Two chances not taken, four points left on the table and, it would have been asked, can you really afford such profligacy with Manchester City on your tail?