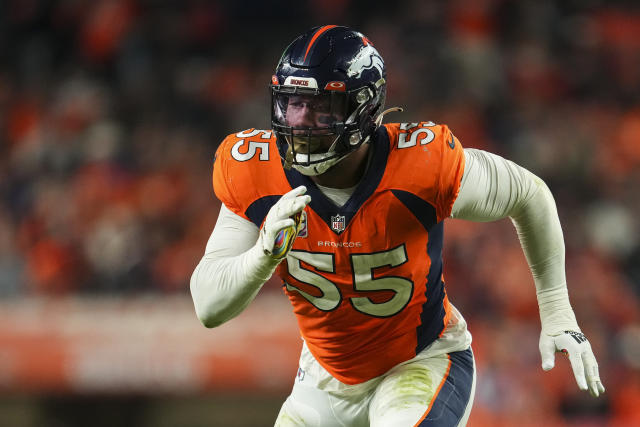 The Miami Dolphins didn’t take long to lock down their newest pass rusher.

Bradley Chubb reportedly signed a five-year, $119 million contract extension with $63.2 million guaranteed, according to ESPN’s Adam Schefter, two days after the Dolphins traded running back Chase Edmonds, a 2023 first-round draft pick and a fourth-round draft pick in 2024 to the Broncos.

How did the deal come together less than 48 hours after the trade? Chubb’s agent, Erik Burkhardt, reportedly was given permission by the Broncos to begin negotiating with the Dolphins before the trade became official, according to Sports Illustrated’s Albert Breer.

Dolphins are printing money
Chubb figures to play a major role in the Dolphins’ plans moving forward, especially after they traded for or signed other big players to exorbitant contracts.

The moves make sense only because the Dolphins are winning and they already have two of their biggest offensive players and another one of their defensive stars on rookie deals.

Quarterback Tua Tagovailoa is in the third year of his rookie contract and the team could exercise his fifth-year option this spring for around $22.6 million, according to Over The Cap. They could also offer him an extension earlier if they had the money. Wide receiver Jaylen Waddle is also playing at a high level and has two years left on his rookie contract after this season, not including his potential fifth-year option as well. Safety Jevon Holland was drafted the same year as Waddle (2021) so he also has two years left but doesn’t have a fifth-year option.

The Dolphins have spent a lot of money this year at marquee positions, but it’ll be worth it if they can maximize their potential with a combination of rookie deals.

The Miami Dolphins made the biggest splash of the 2022 trade deadline by acquiring linebacker Bradley Chubb from the Denver Broncos. Now, they’ve solidified the 26-year-old as the

cornerstone of their defense for years to come.

According to ESPN’s Adam Schefter, the Dolphins and Chubb agreed to a five-year contract extension worth $119 million with $63.2 million guaranteed. The deal keeps him in South Beach through the 2027 season.

The 2018 No. 5 overall pick played the 2022 season on the fifth-year option of his rookie deal after failing to agree to a long-term extension with the Broncos.

Miami acquired Chubb hoping he will be a difference-maker on the defensive line. He has 26 total tackles, 5.5 sacks and two forced fumbles in eight games this season with Denver.

The 2020 Pro Bowler is one of the most respected edge-rushers in the NFL. He made an immediate impact as a rookie when he finished with 60 total tackles, 12.0 sacks and 19 tackles for loss. However, injuries have hindered him from consistently producing at the level he established in his first year.

Chubb was limited to four games in 2019 after suffering a partially torn ACL. He missed the start of the 2021 season after undergoing ankle surgery in September and only appeared in seven games that year.

When healthy, the NC State product is able to wreak havoc on opposing offenses, and Miami did the wise thing by locking him up for the next five years.

With Chubb in the fold, the Dolphins have the potential to be perennial contenders in the AFC.

MIAMI GARDENS, Fla. — (AP) — Newly acquired linebacker Bradley Chubb and the Miami Dolphins have agreed on a five-year extension that could be worth as much as $119 million, a person with knowledge of the negotiations said Thursday.

Chubb’s deal includes about $63 million in guaranteed money, said the person who spoke to The Associated Press on condition of anonymity because neither the agreement nor the terms had been revealed publicly.

The Dolphins made a trade with Denver earlier this week for Chubb, who had 5-1/2 sacks this season for the Broncos and is a past Pro Bowl pick. They made that deal expecting to get a long-term contract done and it didn’t take Dolphins general manager Chris Grier long to finish that task.

“When you do a deal like that for a player, you always would like to,” Grier said earlier this week.

Chubb is expected to make his Miami debut on Sunday when the Dolphins visit Chicago.