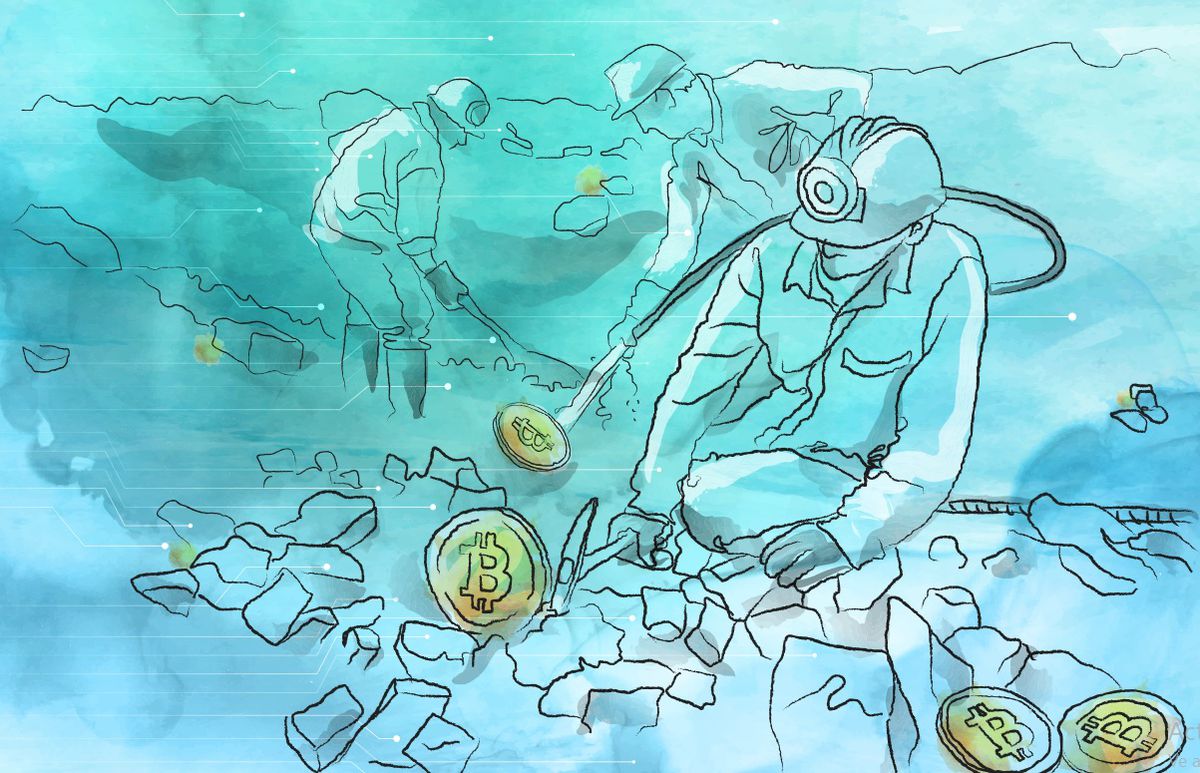 Upon landing on the island, I woke up and saw that my brothers Diego and Maria were still asleep.

“We’ve already arrived!” Screamed. Diego didn’t even hesitate. Maria opened one eye and met me with her gaze. We were still drowsy when two policemen intercepted us as we left the airport.

They told us “come with me please”.

My parents, more awake than us, did not seem anxious. The cops explained to us that there are no legal tender coins on the island and we have to adapt. We can only use cryptocurrencies.

I asked him, “This bitcoin thing?”

They nodded. They gave us an explanatory brochure, which we read carefully. Bitcoin is described there as a digital currency, and it is a kind of virtual money completely. Each bitcoin is a computer file that is stored in a “digital wallet” application on a device, such as a mobile phone or computer.

I told my brothers that this wouldn’t be too complicated, people can send bitcoins to their digital wallet, so it’s easy to send bitcoins to other people or merchants. Each transaction is recorded on a public list called the blockchain (blockchainIn English).

I kept reading, surprised, that thanks to this you can trace the history of bitcoins to prevent people from spending coins they don’t own, making copies or undoing transactions.

-The blockchain – My brother explained to me – it’s a data structure. A chain of blocks, where each block contains a set of transactions. A type of distributed ledger that contains all transactions in chronological order; A network of many, many computers share this book.

My sister asked: “And many computers, how do they come to an agreement?”.

As we read, when someone wants to make a transaction, let’s say buy something, they send the request to the computer network. There, special computers called miners are responsible for collecting orders (and making some checks, like having enough money to make a purchase), and integrating them into the blockchain.

I asked him, “But if there are so many computers, who is responsible for updating this block chain?”

Well, a puzzle has been proposed, which is actually doing a very simple arithmetic with certain values, so that the result is a seemingly random value. A simplified version would be, for example, asking them to calculate, relative to the primes of p and giving the value x, the cube of x, and keeping the remainder from calculating the integer division of the cube of x by p. That is, if x = 20 and p = 541, the result will be 426, or if x = 21, with the same value as p, we will get 64.

“So you only changed one number and the result is completely different?” asked Maria in amazement.

“Exactly,” Diego noted, “is different and unpredictable if you don’t do the math, which is why it’s called work test. Come on, I’ll test you, let’s see who first finds the value of x cubed by 541, provides the remainder ending in zero.

My sister and I unlocked the mobile phone. Within a few minutes, she announced the result with a big smile.

My brother continued, “I just asked you to end with a zero, a zero.” Imagine if the goal was that with the same action it ends in two zeros. Do you want to experience?

Our fingers slid across the screen very quickly. In less than a minute, I got it

I shouted from the rooftops: “481!” My strategy of starting at 540 and going down wasn’t too bad.

Again, verifying it took a few seconds, and calculating it took more work. Now you’ve seen why it’s called Proof of Work, but we still need to understand how the blockchain keeps money available to everyone. In the brochure there was a number.

We decided that each rectangle represents a block. In each, three transactions appeared to be reversed; For example, in the first group, we explain that D gave M 5 coins and D paid R 3 and 4 coins respectively. The B flag can be a kind of block name and the number next to the BA flag appears to be referring to the previous block.

– Welcome !! My sister said: Did you notice that they are the initials of our name? Diego, Roger, Maria.

“Yes,” I said, “maybe there was a lot of coincidence.”

Since 541 played the denominator p in the examples in the handbook, we tried dividing 82821 by 541, and gladly 48 came out. We already knew the relationship how the BA sign of the second block was built, but where did B come from?

My sister remarked “Did you notice that it starts with 48 and then the values ​​of the three operands are concatenated?”

There was evidence of work. Playing with the numbers in the booklet, we found the puzzle: We had to calculate a number whose first digits were 48421 so that when it was cubed and the integer divided by 541, the last two digits of the remainder were 00. And that came from only 4842176!

“Well, I would have already,” Diego judged. It is declared by the miner who gets this value; Other miners (as Maria does) validate it, and if they agree, the block is added to the chain.

We went to the police and explained to them that we already understood. The policewoman mysteriously smiled and gave us a piece of paper and asked how much money do you have?

We managed to pass the test, and with it a small bonus we spent on a pizza, which costs neither more nor less than 10,000 Bitcoin. It was 2010. I think the euro pizza was worth over 500 million euros!

Can you also pass the test?

Crypto challenges will be posted every 15 days. Readers can leave their solutions and discuss the problem in the comments on this page, so anyone who wants to solve it on their own is advised not to read it until the puzzle is solved. You can also email your responses [email protected]. In each new challenge, we will post the previous solution, along with a comment with some of the original or inspiring ideas we received.

Vanessa Daza Fernandez She is a professor and researcher at the Department of Information and Communication Technologies at Pompeu Fabra University in Barcelona.

A solution to the previous challenge

The cipher tool featured in this challenge is Secret Sharing Schemes: How to Share a Secret Value s between different participants, giving each participant with me part fiin this way only those subgroups of authorized participants (which define what is known as Access Structure).

In the first two shares of the secret (lock code), the authorized subgroups were all those with two (or more) participants. This is known as the threshold-reaching architecture (in this case, the threshold value is 2). Israeli cryptologist Adi Shamir (S for RSA) has proposed a secure way to share secrets to the Threshold Access Infrastructure You are: a secret polynomial is chosen, f(x)Degree t-1 The secret is a separate term she is called

And the point of the Cartesian plane (i, f(i)) is assigned as part of the co-Pi.

Secret polynomial f(x) has unknown coefficients, s, a1, …, at -1. Intuition (and mathematics) tells us that to find these t-values ​​we need to know at least t-data from those polynomials, eg evaluate them at different points. If there are less than t points/evaluations/fragments, then any polynomial of degree t-1 is possible, so the secret value s = f(0) is completely indeterminate.

In the case of threshold 2, the polynomial is of degree 1 and corresponds to a straight line, f (x) = s + a 1 x. In the second distribution of parts made by the forest wizard, which also corresponds to a line, we have that the line passing through the points (1.15) and (2.17) is the line containing the equation y = 2x + 13. This line intersects the OY axis at Point (0.13), so the secret in this case was 13.

To restore a secret polynomial (or parabola), three evaluations of a polynomial are needed, that is, three parts from three different kingdoms, for example we will take Kingdoms 1, 2, and 3. With this information, we will propose a system of three equations with three unknowns; The unknowns are s, a1 and a2:

From that day forward, since t = 5 parts (i.e. all parts of the Five Kingdoms) would be necessary to recover the secret, one possibility might be to use a secret polynomial of degree 4. But there is another, simpler and more effective possibility (which works as long as the Threshold t equals the total number of participants): given the secret to be shared, the forest wizard simply had to choose four parts at random, ie f1, f2, f3, f4, and specify the latter as f5 = s – f1 – f2 – f3 – f4. Thus, the sum of the 5 parts will give the secret, but with 4 or less parts, no information about the secret will be obtained.

When using these schemes to share secrets in real life, the secrets and parts do not have a free size, but for example, the secret is chosen from the set of integers {0,1,2,3, …, q-1} prime what or whatand we work with modular operations units, ie what or what equal to 0, P + 3 equals 3, etc. Thus, the size of the fragments is achieved and (i) They are also controlled, since they belong to the same group {0,1,2,3, …, q-1} The secret is shared.

Many of our readers (such as Javier, Ramiro or Joaquín) have quickly solved this challenge … So we ask you an additional question: Another option was for the wizard of the jungle to fulfill the wish of Kingdoms 1, 3 and 4 to fulfill the subgroup {2,5 } could not retrieve the secret, the secret of the access structure containing all subsets of 2 cardinals except {2,5} was supposed to be split. Do you dare to find a way to share the secret in this situation?

Note: We still have to solve the music coding challenge that Salva Fuster sent us in the comments to one of these challenges. We have already received a reply in our mail [email protected] We encourage you to solve it as well. In the next challenge we will publish the solution sent to us by its author.