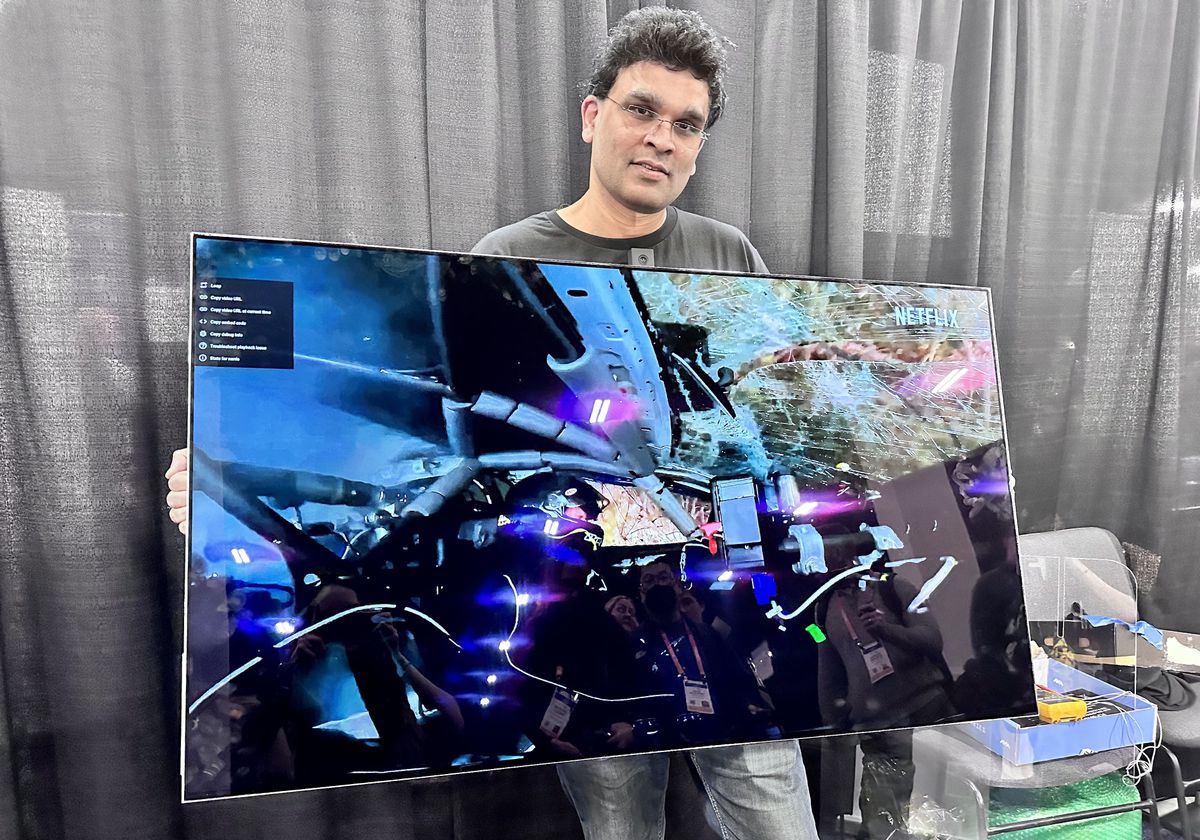 From televisions that fold to be stored and go unnoticed to others that rotate to stand upright. These are some of the inventions that caused the most talk at the latest edition of CES, the world’s largest consumer electronics show. In this edition, which takes place between January 5 and 8 in Las Vegas, light is shed on a part of the devices that seems to be taken from the future: the first TVs that say goodbye to cables.

Over the past few days, when accessing the home entertainment company Displace’s website, the following message could be read: “On January 5, 2023, television as we know it will change forever.” What this company makes is a 55-inch 4K OLED wireless TV, that weighs about 20 pounds. [unos 9 kilogramos]. “Anyone can easily pick up and move a TV,” says Balaji Krishnan, founder and CEO of Displace, picking it up.

But if this device stands out in something, it’s because it’s completely wireless, so it doesn’t need to be plugged into a power outlet via cable. Inside, it hides four rechargeable batteries, which, according to the company, guarantee a month’s autonomy with daily TV use of about six hours. Since the batteries can be individually inserted and removed, they could theoretically be charged one at a time while the device remains powered on. Innovation is paid for, so this TV will have a hefty price tag. Displace claims it will go on sale in the US in late 2023 for $2,099.

“Many companies claim to have made wireless television, when in reality what they mean is that they have managed to go from many cables to one,” says Krishnan. For him, in addition to the fact that this device does not have cables, it is also necessary that it be easy to transport and install on any wall in the house without drilling holes. Displace’s suggestion is “an active loop vacuum technology that allows you to ‘stick’ the TV to the wall as if by magic, simply by bringing it closer to it and giving it a slight push”.

Krishnan “envisions a world with multiple displays on walls that offer great value to consumers wherever they are in their homes.” “To achieve this, it is important to redesign the TV, eliminating all the usual frustrations and making it as easy as possible to install on any surface in the home,” he insists. In addition, several televisions can be installed together to form a larger device with, for example, “110-inch large screen”. “If you’re having a party, you can put four TVs together, and when you’re done, split them up again to move them to different rooms,” he suggests.

This wireless TV, in addition to being tactile, can be controlled by voice and hand gestures. While a simple pinch would do the trick to zoom in or out, it’s also possible to reach in and grab what’s on the screen to cast it on another Displace TV in the house. The device also includes a facial recognition system to determine if a user moves from room to room and automatically switches what’s playing between TVs. The company highlights that the button at the top of the screen “allows you to disable this feature for privacy reasons.”

TV receiving video from a box

Displace wasn’t the only company taking advantage of CES to showcase a TV of this kind. LG on Wednesday introduced a 97-inch OLED M display that can receive video and audio from a device that can be placed about 10 meters away. “Unlike traditional TVs, where all input ports for connecting external devices are located on the back or sides, this port comes with a separate Zero Connect box that wirelessly sends video and audio signals to the screen.” , says the company, which has not provided many details about the technology.

Both televisions are another example of an ambitious goal for tech companies: ending cable. In 2021, the Russian startup Reasonance demonstrated a prototype of a wireless smart TV. In this case, it doesn’t run on batteries, but does include technology designed to send electricity wirelessly from an outlet to your TV. Multiple tech giants are also exploring the potential of this and other systems to charge all kinds of terminals over the air. Xiaomi, for example, introduced technology in 2021 that supposedly allows users to remotely charge multiple electronic devices at the same time, without having to resort to tedious cables or wireless charging pads.